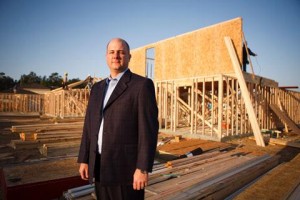 Eric Lipar has LGI Homes on a fast track for growth because the CEO wants to take the company public within the next five years.

LGI Homes recently acquired 313 home lots in the Houston area, has another 200 lots under contract and is opening an office in Phoenix — the first time it has expanded outside Texas. On top of that, the Conroe-based homebuilder broke a company record in October by closing on the sale of 57 new starter homes in one month. That breaks the previous LGI Homes record, set in February 2008, of 56 closings. The company ranked No. 12 on the Houston Business Journal list of Largest Houston-Area Homebuilders with 2009 local gross revenue of $28.5 million.

Lipar is lining up multiple capital sources and buying land and home lots to fuel strategic plans at the company, which he owns with his father, Tom Lipar. The CEO says a family-owned business only has two exit strategies — sell or go public. LGI Homes chose the stock option.

The homebuilder is opening a Phoenix office because the company needs to have operations in at least two markets besides Texas to go public, Lipar says. LGI Homes intends to expand into Atlanta or one of the Florida markets in 2012 to meet that requirement.

Lipar expects land prices in Phoenix to hit bottom in 2011, making it a good place to sell homes in 2012.

Closer to home, LGI Homes recently completed its first local deal with GTIS since they formed their alliance. The partners acquired 202 home lots in rural Mallard Crossing, a community two miles from U.S. Highway 290 in Hockley, northwest of Houston. LGI Homes bought the lots from Joe Fogerty, manager of 195 Mallard Crossing Ltd., for an undisclosed sum. Lipar says the company normally spends $20,000 to $25,000 to get a lot ready for home construction, and the Mallard Crossing lots were purchased for approximately 70 percent of replacement cost. That would put the value of the deal between $2.8 million and $3.5 million.

LGI Homes started building its first six houses in Mallard Crossing on Dec. 1. The six different floor plans range in size from 1,200 square feet to 2,400 square feet and will be priced at $104,900 to $149,900. Sales will begin in January on the six homes, which will be ready for move-in in February. Another six homes will break ground in January.

The company’s strategy is to build starter homes on a speculative basis rather than construct model homes. It only takes LGI Homes 45 to 60 days to complete a house, because it does not give home buyers the option of customizing finishes. “It keeps our cost down,” Lipar says. “They’re very easy floor plans to build.” First-time home buyers also like the fast process, he says, because they usually need to move quickly because of expiring leases.

LGI Homes also broke ground last week on the first six houses in the Sterling Lakes master-planned community in Rosharon. LGI Homes recently bought 111 finished home lots in the community south of Houston with financing from Regions Bank. Lipar would not reveal the purchase price, but says LGI Homes got a 30 percent to 50 percent discount on the lots. “We’re paying less than replacement cost,” he says. The Sterling Lakes homes will range in size from 1,200 square feet to 2,500 square feet and cost between $120,000 and $170,000.

In the Baytown area, LGI Homes and GTIS also have 200 lots under contract in a deal scheduled to close within 60 days. LGI Homes intends to build homes on all of the lots it acquires. The company initially will construct 24 homes in each community, then add to the inventory as they sell.

The homebuilder, which ranked as Houston’s highest in the 2010 J.D. Power and Associates New-Home Quality Study, is in the process of hiring salespeople and other employees to handle the new work.

One Response to “LGI Homes on fast track with lot acquisitions, expansion to Phoenix”